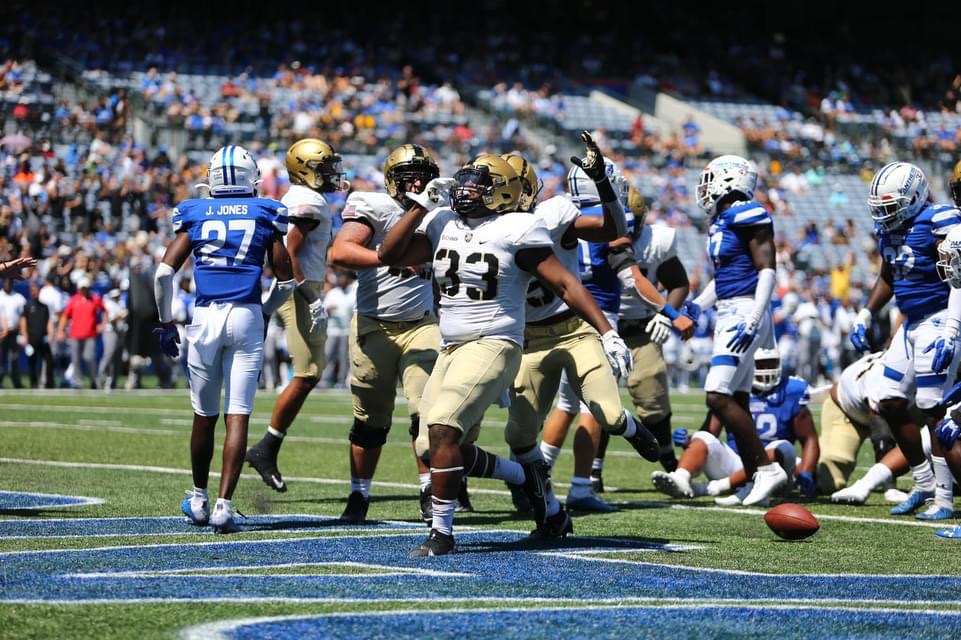 A circle of Army players stood over a pile as officials tried to find the fumble.

The victory was Jeff Monken’s 50th as Army coach. The wire-to-wire win was a bit of redemption for 18 Army players that left Center Parc Stadium disappointed after a loss two years ago.

“I don’t think I had fears or concerns heading into this game,” Monken said on his expectations before the opener. “I’m cautiously optimistic (before games). I didn’t know what our team would do, but I knew we had a great group of seniors and great leaders. Our leadership is really strong.

“The last time we were down here, we didn’t play very fell. They outplayed us. And, they have a better football team this year than they did two years ago. I think that’s [Georgia State] a really athletic, well-coached team, but I think our guys executed well.”

From start to finish, Army’s offense and defense turned in a near-complete performance. Army owned time of possession in the first half – 22 minutes and nine seconds to 7 minutes and 51 seconds. The offense came out determined to finish drives. The Black Knights scored its first three touchdowns on 3rd-and-goal to build a 21-0 lead.

“It’s just our culture,” Riley said. “We believe that every time we touch the field that we march it down the field and get a touchdown. No matter what down it is, that’s our culture.”

Starting quarterback Tyhier Tyler engineered two touchdowns on his first two drives before leaving with an apparent ankle injury. Monken said Tyler has, “a lower leg sprain” and he think the quarterback should be OK in his postgame press conference.

Senior Christian Anderson took over for Tyler and played flawlessly. Anderson called his own number on a designed quarterback draw on 4th-and-goal for a time-expiring, touchdown to end the first half. He completed a 40-yard touchdown pass to slotback Tyrell Robinson to start Army’s second-half scoring.

“I knew coming into the game that TT (Tyhier Tyler) was going to start and I was going to come in some point in the game,” Anderson said. “Overall as an offense, we did a really good job of executing the play when we needed to. We didn’t try to do too much. We just executed what was in front of us.”

“One of things we try to do is run the ball and stopped the run,” Carter said. “Any time we can do that and get a victory, it’s a good day.”

Army’s effort wasn’t perfect. There were struggles on special teams, specifically in the punt return game. In one of the more stranger college football sequences, Army fumbled and lost a punt not once but twice on back-to-back plays. Yes, back-to-back plays. Georgia State was flagged for holding both times, taking away both fumble recoveries.

VIDEO: Breaking down Army’s win with Jordan Horvath of As For Football