Army-Navy game plans continue to first whistle and beyond 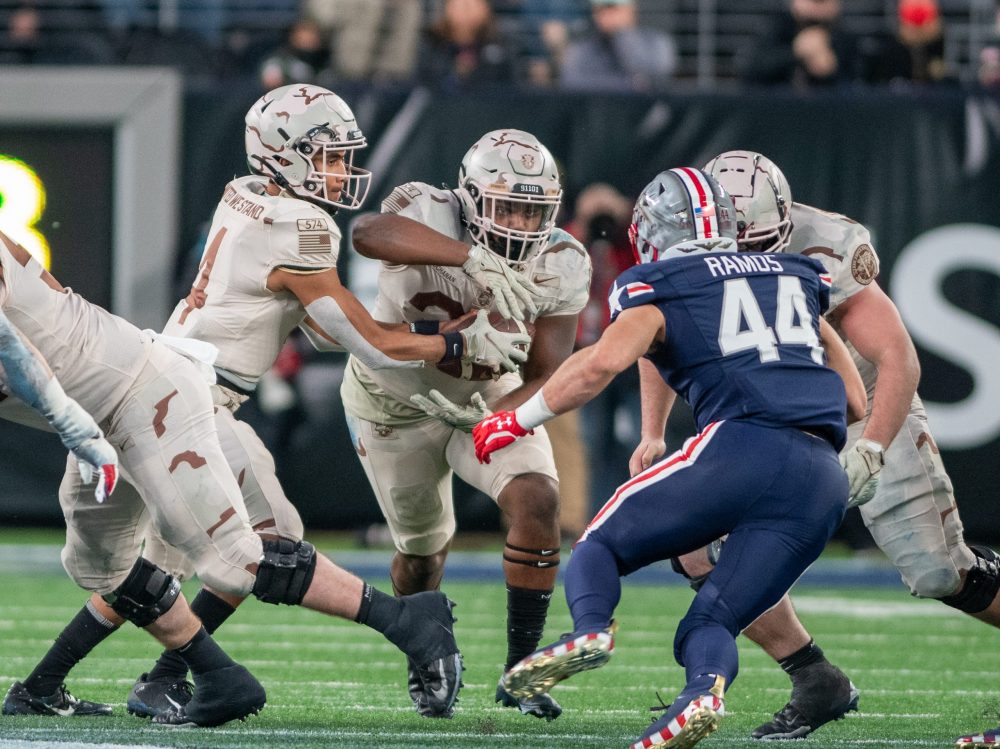 The chess game begins long before the 123rd Army-Navy clash kicks off Saturday.

In college football’s most storied rivalry, coaches on each side spend endless hours looking for that new wrinkle or tweak of an already existing play or formation because of how well each staff knows each other.

Army offensive coordinator Brent Davis says there’s a balance on the base plays along with maybe some things that “go against your tendencies.”

“It’s a balance,” Davis said. “You can’t just wholesale change and ask your guys to do things that they haven’t done all year. I don’t think that’s the way to go for sure. You have to take into account that we have to be a little bit different in this game.”

Many will remember the celebration of Army’s streak-busting win over Navy in 2016. But, do they recall that Kell Walker, then a freshman, was moved from slotback to fullback for the game. Walker led Army with 94 yards in the historic victory.

A year ago, Army centered its offense around quarterback runs and slotback Tyrell Robinson as a diversion away from the fullback. After a 56-yard first-quarter touchdown by quarterback Christian Anderson, Navy’s defense settled in and came away with a 17-13 win.

“(Navy’s defense is gap sound, they play with outstanding effort,” Davis said. “They have all of the gaps filled. They stay in their gap. They don’t stay blocked. They get to the same look from a lot of different ways, lot of different presentations. It looks different and it ends up being the same on the snap and after snap.”

What might Davis and Army have in store for the Midshipmen this time to try and throw off Navy defensive coordinator Brian Newberry. That hasn’t been easy against Newberry’s defenses. Army has averaged 127 yards and scored only three total touchdowns (all quarterback runs) in the last three Army-Navy games.

To put things in perspective, the Black Knights have averaged 404 rushing yards in their five wins this season.

“The one thing I’ve taken away from these games is that you have to be careful to not outthink yourself,” Newberry said. “The most important thing for our guys in that environment is that you take as much of the thinking process out, as much of it as you can so your guys can go play fast and not have to think too much.

“It’s stressful these games but they are fun at the same time. Before I got to Navy, I was at Kennesaw and we were an option team there. I’ve always enjoyed scheming and going against it. I think it’s old-school football at its finest. So to me, it’s a lot of fun.”

Newberry and Navy will have had three weeks to prepare for Army come Saturday. Will Navy see Tyson Riley, Army’s leading rushing fullback, line up as a slotback for the second straight game? Or was Riley’s slotback debut against UMass just a smokescreen?

“That’s something that we planned to do all along,” said Davis. “Even in preseason camp, he played there some. He was injured for a while…He didn’t practice very much for four to six weeks and he would play on Saturdays. He was just gutting it out. You can’t ask a guy to play two positions and not get the practice.”

Davis raved about Riley’s versatility earlier this week. Who knows maybe he lines up under center for a play or two? Riley did play quarterback in high school and was originally recruited by Army to play the position.

That’s what makes this game the best theater that college football can offer. It’s a guessing game for each coaching staff up until the first whistle and beyond. Every play call, every snap, every alignment is well calculated with the ultimate goal of singing your alma mater second as the victors.

Oh to be a fly on the wall in the meeting rooms of both service academies the past two or so weeks.