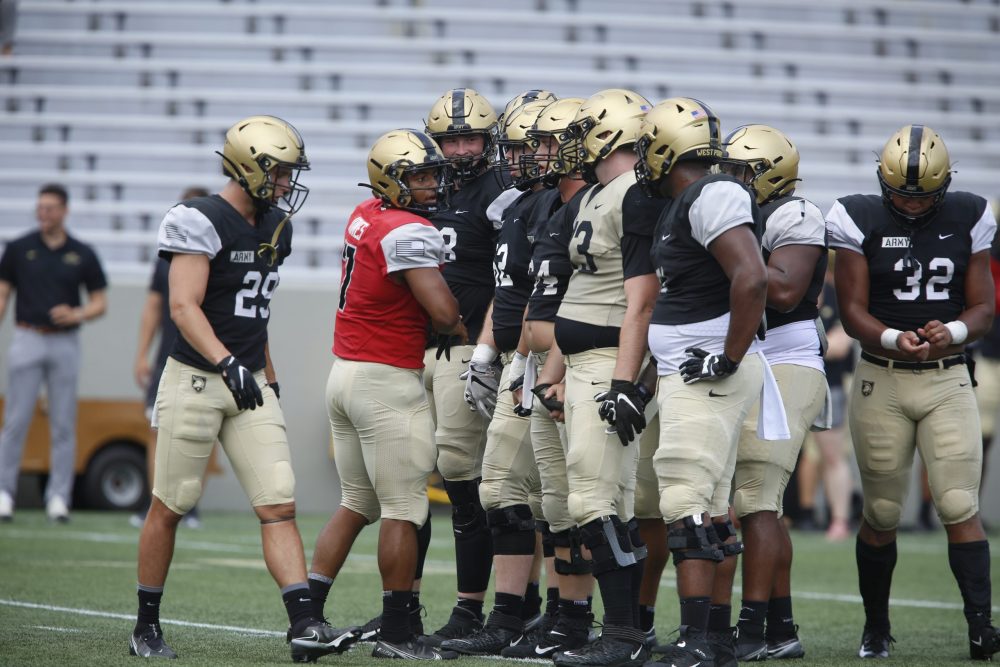 Army is two weeks away from starting the season following its second preseason scrimmage and coach Jeff Monken said he’s in no hurry to announce or name a starting quarterback.

In fact, Monken said the starter could be decided, “when we figure out what the first play is going to be (against Georgia State on Sept. 4).”

“It might be a different quarterback based on the play,” Monken said in his post-scrimmage press conference. “Literally, I don’t know that we are prepared to say that there is a clear starter. That one guy is the guy and that he’s going to go in there and he’s going to be the quarterback until he gets hurt or screws it up.”

Monken said the starting quarterback might be (in no particular order) Christian Anderson, Tyhier Tyler, Jabari Laws or Jemel Jones.

“It could be anyone of those guys,” Monken said. “I think if Cade Ballard or Maurice Bellan were our quarterback that we could execute our offense and be efficient. We are not in any hurry and I don’t think those guys are all jarred about who the quarterback is going to be. They are have confidence in each other and themselves and really do believe and understand all one of them could be the guy in there and that likely it’s not going to be the same guy the whole game.”

Tyler, Anderson, Laws and Jones each received their opportunities to run the offense Saturday. Ballard and Bellan did not play under center, Monken confirmed.

Anderson said he’s leaving the decision up to the coaching staff and “focusing on executing when I have the opportunity.”

The scrimmage started with Laws, Anderson and Jones getting their chances in a two-minute scenario. Ball carriers were not taken to the ground during that period.

“We have two weeks to go,” Monken said. “I’m glad because we aren’t anywhere where need to be.”

“I’d love for us to be ready to play a game this afternoon. But. that’s just not realistic. But, I think we are moving along and improving. Like I said, there were a lot of mistakes today and a lot of things that need to be corrected and I’m confident that we will get them corrected. But, I think we are headed in the right direction at least in terms of being prepared.”

Injuries are still a concern for Monken. Senior guard Mason Kolinchak injured his knee during Army’s first scrimmage last week and could be out, “another week or two,” Monken said. Kolinchak was competing with fellow senior Noah Knapp for the starting position at one guard position. It looks like senior Dean Powell and Knapp will be the starting guards for the opener. Monken said senior Zack Ward has been moved from tackle to guard.

Monken said senior linebacker Kemonte Yow has been practicing but he’s not up to the speed where, “he can take someone to the ground,” yet and would provide veteran depth at inside linebacker where Arik Smith and Spencer Jones are the starters. Monken said Yow, “is getting pretty close” to full contact. Jones is “a little dinged up” and didn’t participate in the scrimmage, Monken said.

Freshman on notice: Brian Burton was one of three freshman along with Veney and Max DiDomenico that Monken mentioned as potentially making the travel squad and contributing against Georgia State.

DiDomenico is one of the more pleasant surprises of the preseason. A high school quarterback, DiDomenico was brought in to play safety as a direct freshman. DiDomenico is playing defense for the first time since his sophomore year at Clemens (Texas).

“He’s done some good things and got himself in the mix on special teams and a down-the-line guy at safety,” Monken said of DiDomenico. “That’s been good to see.”

Veney also caught a pass over the middle from Jemel Jones. Monken said Veney reminds him a lot of a junior slotback Braheam Murphy.

“Laquan Veney is a really good athlete,” Monken said. “They (Veney and Murphy) move very similarly and have a lot of the same skills. What they bring to that position is very similar. I’m excited about him. He played at the prep school last year and just being a freshman, he’s impressed us.”

Special teams notes: Monken wasn’t thrilled with the fact that Army had to punt three times against its scout team early in the scrimmage.

“That was three times too many,” Monken said. “I was hopeful that we wouldn’t have to punt at all. I was hoping that we would have to create some punt situations. But give the gold (scout team) some credit, they stopped our offense three of the first four times we had it.”

Freshman Matthew Rhodes, who is also an Army baseball commit, got an opportunity to punt behind senior Zach Harding.

Junior kicker Cole Talley is having a strong preseason after sitting out last season. Talley made 19-of-20 extra points and connected on a 41-yard field goal his freshman year.

“He (Talley) had a deep kickoff into the end zone (Saturday),” Monken said. “He gets a good lift on PATs (extra points) and field goals.”