Army falls to UTSA in OT 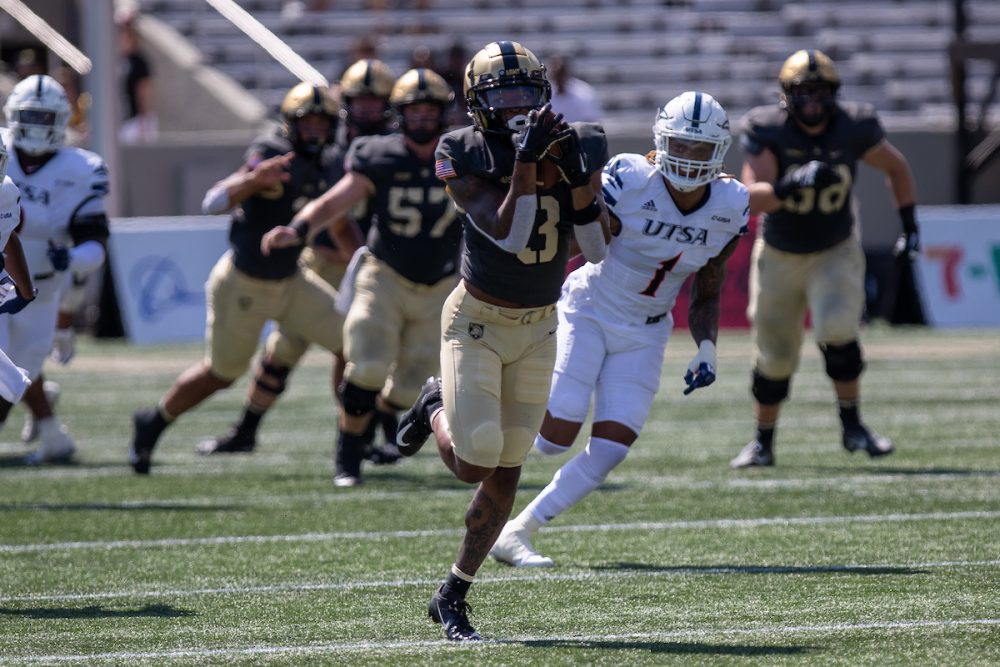 There was no doubting Army’s effort against Texas-San Antonio. The Black Knights led by 14 points into the third quarter, lost momentum as the Roadrunners scored 21 straight points, battled back to send the game into overtime and survived a potential walk-off field goal.

But, Army’s fundamental execution and mental errors still leave something to be desired for the second straight week.

UTSA quarterback Frank Harris silenced the home crowd with one flick of his wrist. Harris connected with DeCorian Clark on a 7-yard touchdown pass in the first overtime to send Army to a 41-38 loss, its first defeat in a home opener since 2015.

Army (0-2) gifted UTSA all of its 14 first-half points on a punt that glanced off returner Tyrell Robinson’s leg and was recovered by the Roadrunners at the Black Knights 1 and a 12-man, on-the-field penalty that wiped out an Army interception and led to a 20-yard TD pass on the next play. The two mistakes kept UTSA within striking distance at the half, trailing 21-14.

Harris rebounded from a shaky first half where he missed two wide-open receivers in the end zone to throw for 359 yards and three touchdowns.

“UTSA earned enough plays on their own today,” Army coach Jeff Monken said. “They are really good team and they are really physical and talented. We didn’t need to give them any more and the ones we gave really hurt.

Big plays highlighted Army’s offense for the second straight week. Tyhier Tyler opened the scoring with a 77-yard touchdown pass to Ay’Jaun Marshall. Cade Ballard threw for 221 yards including a 42-yard pass to Robinson, tying the game at 35 with 1:03 left.

Ballard, who passed for the most yards by an Army quarterback since 2019, said he’ll remember a play that didn’t go in the Black Knights’ favor over any completion. Ballard’s pitch in overtime was directed at blocking fullback Tyson Riley and push Army further behind schedule after a false start penalty.

“We had a great play called,” said Ballard, who was taken off the field on a cart due to dehydration in the second half. “Coach (Brent) Davis set up an awesome play call. I made the mistake of pitching it on the ground and that’s the one I‘ll remember.”

UTSA loaded up for the run, daring Army to pass. Fullbacks Jakobi Buchanan and Tyson Riley combined for 38 yards on 19 carries, averaging 2.0 yards per play.

Monken wasn’t happy with Buchanan’s lost fumble and the offensive line allowing defenders to go unblocked and blow up plays.

“We turned guys loose, not blocking who we are supposed to block,” Monken said. “I don’t know how that happens. I wish I could tell you. I’ll find out once we watch the film and ask those guys. It’s frustrating to not communicate, just foolish things.

Both Monken and Ballard said Army isn’t in panic mode after its first 0-2 start since 2015. Army has proved its toughness going blow for blow with two talented teams in Coastal Carolina and UTSA. Both games were physical, taking their toll. Army was down its top three tackles (Boobie Law, Simon Dellinger and Shayne Buckingham) by the third quarter. Freshman cornerback Donavan Platt was thrusted into the starting lineup due to injuries to Cam Jones and Isaiah Morris.

Ballard says Army’s tough start could bring out the best in the Black Knights.

“Being 0-2, just puts desperation in a football team I think,” Ballard said. “We have to come back to work tomorrow and next week and correct our mistakes, starting with me. I made plenty of mistakes that can’t happen in a close football game.

“Two weeks out of the year doesn’t define a football team. It never does especially in college football where so many crazy things can happen. It’s a long season and we take to take it day by day and get better each and every day. We just have to come back next week and attack.”