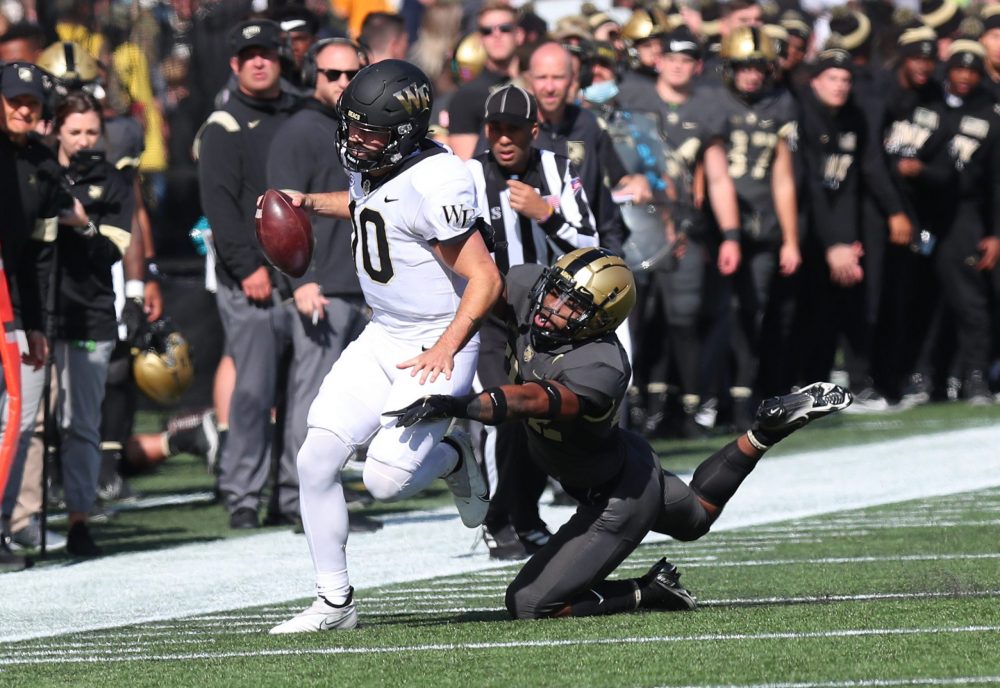 Sam Hartman and No. 16 Wake Forest’s offense was better than advertised. And, Army’s defense, which entered the game seventh in the nation in total yards allowed, had no answers as Michie Stadium records fell.

Hartman threw for a Michie Stadium record 458 yards and tied the stadium record with five touchdowns as the Black Knights’ 13-game home winning streak ended with a 70-56 loss.

The 126 points shattered the Michie Stadium record of 111 (Army-Louisville, 1999). Army (4-3) dropped its third straight game as it heads into a bye followed by a Commander in Chief’s trophy clash against Air Force. The 70 points is the second-most that Army has allowed in its storied history. Heisman Trophy winner Johnny Rodgers and Nebraska scored 77 points against Army in the 1972 season opener

“He (Hartman) knows their scheme very well.” said Army senior safety Cedrick Cunningham of Wake Forest’s run-pass option. “He came out and made all the right reads and essentially, they outexecuted us.

Wake Forest (7-0) produced video-game numbers. Six of Wake Forest’s nine offensive touchdowns were scored in 1 minute and 21 seconds or less. Four of Hartman’s touchdown passes went for 41 yards or less against what many consider one of Army’s top secondary in recent years. Army’s defense stopped Wake Forest once all day – on fourth down.

“At one point, I looked up there and I think they had 49 points and they had the ball for 10 or 11 minutes or something crazy like that,” Army coach Jeff Monken said. “I just looked up at scoreboard and just shook my head. I couldn’t believe it.

“If I was a fan of football and just watching, that’s a fun offense to watch. I just hate I had to watch it from our sideline.”

Army pressured Hartman early and knocked him down a few times after throwing. But, Hartman’s quick release and his escapability prevented the Black Knights from recording a sack.

“That Hartman kid is really special,” Monken said. “I think he was 23 of 29. That’s unheard of. Since I’ve been here, nobody has done that to us. I don’t know if anybody has been that explosive against us on offense. You guys can probably remind me and make me more sick. I’m disappointed that we lost but proud of the effort of our guys.”

Army matched Wake Forest score for score for the first 34 minutes. Christian Anderson returned as starting quarterback and marched Army down the field on its opening drive for a touchdown, distributing the ball without running himself. After Anderson was knocked out of the game in the Army’s second series, Tyhier Tyler entered and finished a drive that ended with fullback Jakobi Buchanan’s first of two touchdowns. Tyler followed with 24-yard touchdown run of his own.

Momentum could have changed late in the first half but linebacker Arik Smith was flagged for a questionable pass interference call on third down that kept Wake Forest’s drive alive. Christian Beal-Smith’s 13-yard run gave the Demon Deacons a 28-21 lead at the half.

Army may have scored too quickly to open the second half and evened the score on another Buchanan touchdown. Wake Forest answered three plays later with a 75-yard touchdown pass from Hartman to Jaquaii Roberson.

Perhaps, the game’s biggest play followed on Army’s next possession. The Black Knights trotted out kicker Cole Talley for a 44-yard field goal. Only, quarterback Cade Ballard was his holder and not Brooks Hosea. Ballard moved to a shotgun position and threw a pass on his first play this season. Wake Forest’s Traveon Redd recovered from the fake kick, intercepted the pass and turned it into an 83-yard Pick Six.

“The field goal fake was my call 100 percent,” Monken said. “I put it in and I called it. We have been practicing it for weeks. We just didn’t execute it well and that cost us seven points. They returned the thing for a touchdown. I wish that didn’t happened. We had to do something. We just kept playing catch up.”

“We got behind from the very first drive 7-0 and we kept trying to stay up with them all day. I just felt at some point if we could get just one stop and take the lead we are going to put the pressure on them. We just couldn’t get that spot.”

“There’s some positives but just overall it’s not fun to get your butt kicked 70- to whatever it was,” Monken said. “It doesn’t matter.

“We emptied the tank. We tried everything that we could.”