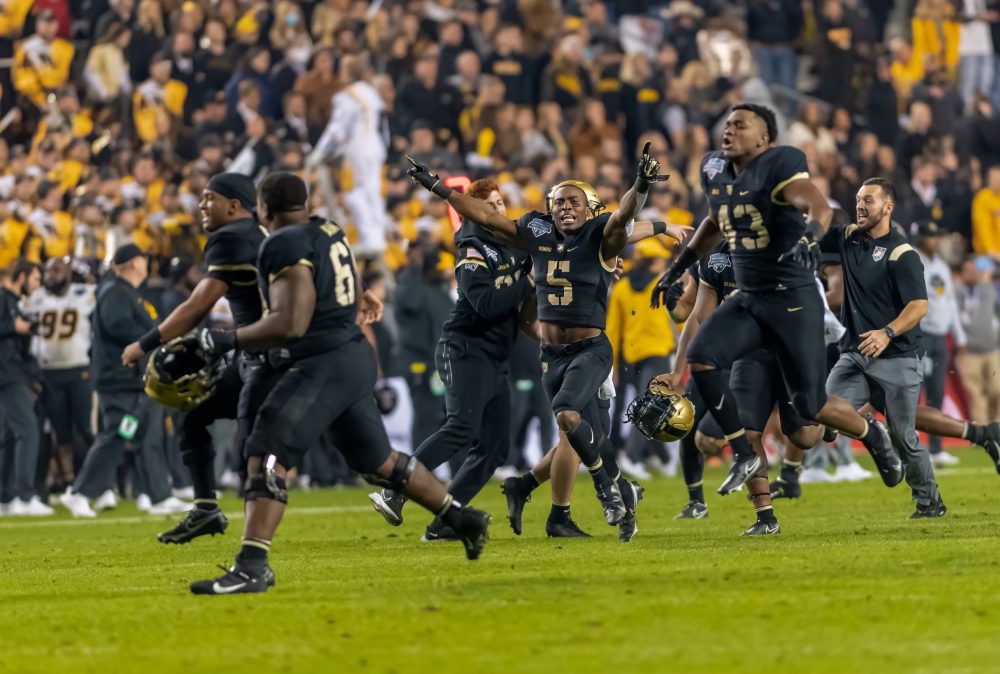 Cole Talley was rushed by teammates and coaches after he watched his 41-yard field goal sailed through the uprights.

The celebration was paused for a second as a penalty flag laid on the field at Amon G. Carter Stadium. A Missouri infraction was declined and pandemonium restarted in Fort Worth.

Talley, who was carried on the shoulders of teammates, walked off a 24-22 Army win over Missouri with the most clutch kicks of his college career.

“Going out there (for the kick), I couldn’t stop thinking about everybody in this brotherhood,” said Talley, who is from Rockwell, Texas less than an hour from Fort Worth. “They mean so much to me. I would do anything for them and I know they would do anything for me. I just love these guys so much. I’m just really happy.”

Army players and fans couldn’t have dreamt up the thrilling finish. Jabari Laws, who had worked his way back from two ACL tears, was summoned with 71 seconds left and the Black Knights trailing by a point. Laws, Army’s third quarterback of the game, called his number on the first play for 13 yards and completed two passes to Isaiah Alston, the second to Mizzou’s 24. The senior rushed to the left hashmark on the next play, setting the scene for Talley.

The junior, who missed from 43 yards out on Army’s opening drive, delivered and Army had its first win over a Power Five School since it defeated Duke on Nov. 11, 2017. The Black Knights also remained perfect at the Armed Forces Bowl, winning for the fourth time in four trips.

Army finished with nine wins for the second straight season and won its fourth bowl game in the last six seasons.

Senior linebacker and captain Arik Smith was named the game’s most valuable player. Smith made 12 tackles and added two sacks. After allowing Mizzou to score a touchdown on the game’s opening drive, Army (9-3) held the Tigers to three field goals in the first half and was down 16-7 at the half.

Army opened the second half with one of its epic time-consuming drive. Jakobi Buchanan put an exclamation point on the possession discarding a Mizzou tackler en route to a 10-yard touchdown on the 17th play.

The Black Knights would take their first lead early in the fourth quarter when Tyhier Tyler, who replaced the injured Christian Anderson, threw his first touchdown pass of the season to Brandon Walters on a 4th-and-2 from Mizzou’s 14. The touchdown pass made Army 5-of-5 on fourth down.

Anderson started the scoring for Army on a 22-yard touchdown run in the first quarter. He left the game with an injured ankle in the third quarter and didn’t return.

Missouri freshman quarterback Brady Cook rushed for a touchdown and threw a 6-yard score to Keke Chism with 1:11 left to give the Tigers back the lead.

Andre Carter recorded a sack to increase his Army single-season record to 15.5 and recovered a fumble. Junior captain Marquel Broughton had a team-high 14 tackles and forced a fumble.