Seniors fuel Army to their last win at Michie 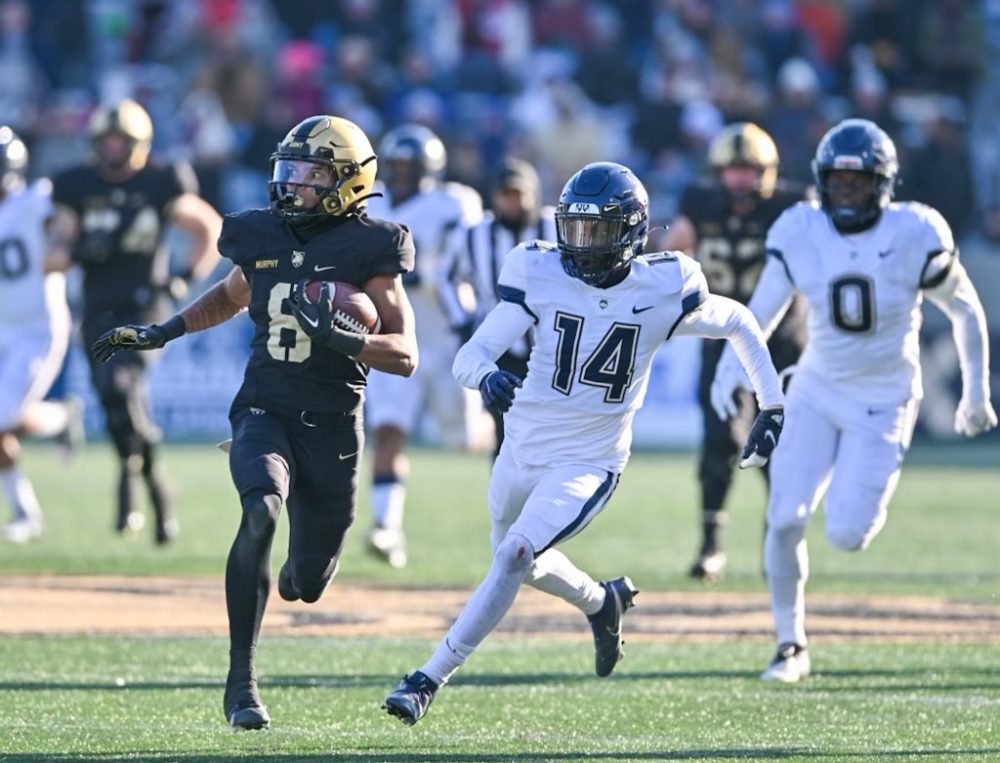 Appropriately, on Senior Day at cold and windy Michie Stadium, a bunch of firsties on the Army football team, plus one freshman, stepped up big time to help the Black Knights deprive upset-minded UConn from a victory.

Behind two rushing touchdowns by senior Tyhier Tyler, one rushing touchdown by fellow senior Jemel Jones and a stunning, 75-yard run to paydirt by senior Braheam Murphy, the Black Knights beat the visiting Huskies 34-17 before a crowd of 31,229.

In addition, seniors Marquel Broughton, back after missing last week’s game due to an injury, and D’Andre Tobias picked off interceptions late in the game to stop two late UConn attempts to get back into the game.

“We were desperate for a win,” said Army coach Jeff Monken, who saw his team lose two close defensive struggles over the previous two Saturdays to arch-rival Air Force and Troy, giving up just 23 total points in the process. “I am really proud of this team. It is special for these guys to go through the four-year experience here and play in this stadium, and with as much success this senior class has had, I am glad they were able to win their last game at home.

“It’s great to get a victory. We have been on the wrong side of some really close games this year. It has been agonizing and tough to swallow. But I can’t say enough about the fight in this team and how they continued to prepare. They were ready today.”

The victory also kept open Army’s faint hopes of reaching a bowl game as well as a chance at a .500 regular season. The Black Knights finish with an away game at Massachusetts next Saturday and then play the annual Army-Navy game on Dec. 10 in Philadelphia. UConn, off an impressive victory over ranked Liberty last week, falls to 6-6 but is still bowl eligible for the first time since 2015.

As much as the seniors contributed to this victory, it was freshman Jabril Williams, who got the Black Knights on the board early in the contest. Williams, who hails from Monken’s hometown of Joliet, Ill., blocked a UConn punt that was recovered in the end zone by Miles Stewart to put Army ahead 7-0 a little more than two minutes into the game.

That was just the start of what became a zany first quarter, featuring two overturned UConn touchdowns on booth reviews, six UConn penalties and a stout Army defense that prevented the Huskies two separate touchdowns with the ball inside the one-yard line. On the first series, Army held the Huskies to a field goal, cutting the Black Knight lead to 7-3. On the second series, UConn was unable to convert 4th-and-1 on the first play of the second quarter, allowing Army to take over on downs.

“When you look in someone’s eyes you can tell if they want it and our defense wanted it today,” said Broughton, a two-time captain of the team. “When we came up against those goal line stands, we looked in each other eyes and we knew we were not folding, we were not giving up, we were not giving in. I think that is the best way to explain it.”

But, an impressive 43-yard run by UConn’s Victor Rosa put the Huskies ahead 10-7 with just 3:47 left in the half. Army, helped by a pass interference call and a clutch 34-yard run by Murphy, who finished with 124 yards on the day, managed to score its first offensive touchdown on the day when Jones pushed in from the 1-yard line with just 18 seconds left in the half. For the second time in two weeks, Army failed to convert the extra point and the Black Knights took a 13-10 lead into the locker room.

After UConn scored midway through the third quarter to regain the lead, 17-13, Army took total command of the game. On the very first play from scrimmage, Murphy took an inside handoff and weaved his way through the UConn defense for a 75 yard for a touchdown run and a 20-17 Army lead.

Tyler added two touchdowns, one late in the third quarter after a holding penalty and bad punt gave the Black Knights the ball on the UConn 38-yard line. The next one, with just 4:23 left in the game, came after an interception by the ever-present Broughton gave Army the ball on the 27-yard line. They were Tyler’s 20th and 21st touchdowns of his Army career.

“Throughout the first half, there were a lot of things we saw that were open,” Tyler said. “But we just had those small things, like missed assignments, that were stopping us. In the second half, we came out confident and with a little bit of an edge and we played our brand of football. The results showed in the second half.”

Monken gave much of the credit to offensive coordinator Brent Davis and defensive coordinator Nate Woody and their staffs for having the team ready as well as making the necessary adjustments at halftime. He also said that winning the turnover battle, which Army was on the positive side, with those two interceptions, was crucial.

“Winning the turnover battle, in my opinion, is the most important statistic related to victory,” Monken noted. “In fact, in all of the games last season in college football, 78% of those games were won by the team that won the turnover battle. It was a big pick (by Broughton) and I am glad we got points off that turnover.”