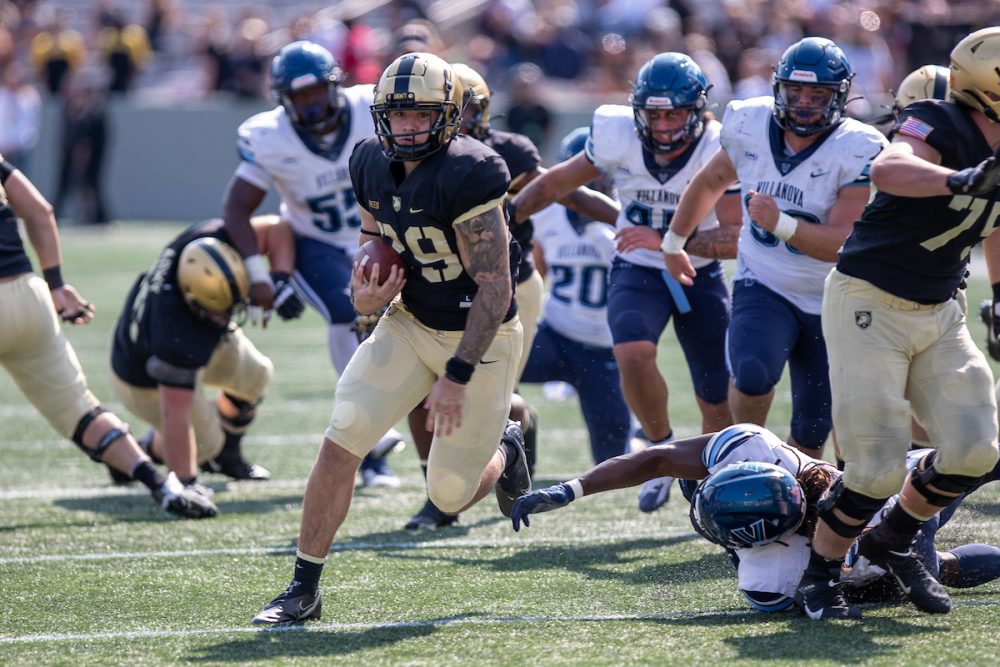 Call this a confidence booster – a much-needed morale builder after two tough losses and the fear among some inside and many outside the Army West Point football program that the season was in jeopardy of getting away.

But Saturday’s extremely impressive 49-10 win over Villanova at sun-drenched Michie Stadium could put Army back on the right track again. That is, if the Black Knights can duplicate what they did on the field against the Wildcats, the sixth-ranked team in the Football Championship Subdivision, and do it again against Georgia State on Oct. 1 at Michie.

“I’m proud of our guys,” said a relieved-looking Army head coach Jeff Monken, who moved into sole possession of second place amongst Army coaches with 59 wins, trailing just Hall of Fame coach Earl (Red) Blaik. “It is good to get a win.”

While no one affiliated with the West Point football team would likely admit it, this was a must-win game for Army. After a difficult loss at Coastal Carolina and the overtime heartbreaker last week to Texas-San Antonio, no one wanted to think what an 0-3 start would mean for a team that faces an unpredictable Georgia State team next and then has to go to North Carolina to face the high-powered offense of Wake Forest.

And, Villanova seemed good and eager for an upset over an FBS team they have not played since 1977.

That did not happen because no matter how you slice it, this was Army football at its best as long as you do not care about the forward pass. The Black Knights racked up 472 rushing yards on 55 carries and for the first time this season used the option pitch to stretch the defense and break open long gains. They also intercepted two passes, thwarting two Villanova scoring drives in the first half when the game was still in contention, and they played well enough on defense to give the Wildcats fits throughout most of the game.

Of course, passing the ball was an afterthought. Entering the game with the best passing efficiency rating in the FBS, Army only attempted one pass, an incompletion in the second quarter. Fourth-string quarterback Bryson Daily may have been trying to pass the ball late in the fourth quarter but he was sacked before he could get the throw off.

Instead, the Black Knights relied on a re-energized running game with a number of option pitches to the outside to dominate the game. It all started after Villanova’s first offensive series stalled and the Black Knights took over after a punt with good field position. The good news was fullback Jakobi Buchanan quickly rumbled for 55 yards to put Army well inside the red zone. The bad news was Buchanan, a mainstay in the Army offense, was injured on the play and did not return to action for the rest of the game. He was seen using crutches while standing on the sidelines, though Monken later said it was too early to know how serious the injury was.

Still, Army was in business and quarterback Tyhier Tyler soon scored on a seven-yard run to give the Black Knights their first lead. After Villanova tied the game with its own sustained drive, helped in large part by a 17-yard scramble by quarterback Connor Watkins on a fourth-and-six, Tyler scooted for his second score of the game – he would have three – a 23-yard run to put the Black Knights up 14-7.

That is where the Army defense woke up. Senior captain Broughton made a toe-tapping interception along the sideline at the Army 7-yard line to stop the next drive and Jabari Moore stopped the next Wildcat advance deep into Army territory with another interception in the end zone that resulted in a touchback.

“Our guys were very prepared and I think worked hard (in practice) at fundamentals and their keys and positioning themselves where they are supposed to be,” Monken noted. “In the early parts of the game, when Villanova moved the ball well against us, the interceptions took the wind out of their balloon. They got momentum and they got a drive going and all of a sudden they turn it over.”

A 6-yard rushing touchdown by quarterback Cade Ballard helped Army lengthen its lead to 21-7 at halftime. In the second half, Tyson Riley, the backup fullback to Buchanan and a player that Monken said was injured in training camp and still not 100 percent yet, scampered for a 70-yard score in the third period. Riley finished with an impressive 158 yards rushing on 21 carries.

“I thought he looked better today than he did the previous two Saturdays,” Monken said. “I think he is still capable of playing faster and more physical and that will come as he gets healthy.”

Tyler’s third rushing TD early in the fourth quarter came before Tyrell Robinson took a punt
return 73 yards to paydirt. It was Army’s first punt return touchdown since Jeremy Trimble brought one back against Temple in 2007.

Tyler, Broughton and Riley all said that practice was pretty intense this past week, with Tyler noting a strong focus on fundamentals and “working on things we could control.”

Even Monken emphasized that the coaching staff focused on the need to play better fundamentally.

“We need to not make mistakes that we can control,” he said. “When we play with poor fundamentals, that has nothing to do with the other team. It is the coaches’ responsibility to teach our guys and make sure they understand the fundamentals and know their assignments. We just were not doing that as efficient as we needed to. It is little things and little things grow into big problems.

“It is my fault in maybe not being more animated in the little things we were missing. Sometimes I get a little too animated and it is sometimes detrimental. I think I got their attention and they did that throughout the week. I am proud of the guys.”