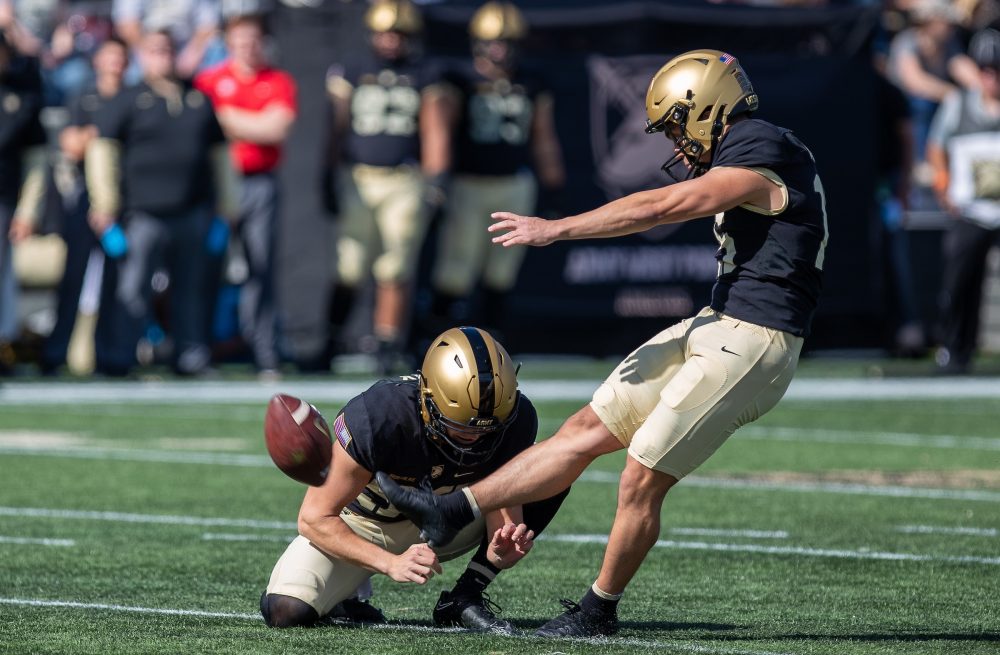 There’s a fine balance for kicker Quinn Maretzki during a bye week.

Bye weeks are a chance for a kicker’s leg to recover but not taking enough practice reps can also make the specialist “rusty.”

That’s what Maretzki experienced after Army’s week off before Georgia State on Oct. 1.

“I think this week I will not cut out all of my reps completely but make sure I’m maintaining my kicking so I can be where I need to be for this (next) game,” said Maretzki, a junior kicker.

A monumental game is on the horizon. Air Force gains possession of the Commander in Chief’s trophy with a win over Army on Nov. 5 at Globe Life Field in Arlington, Texas. The last four games in the series have been decided by seven points or less. Army has won three of those games including a 21-14 overtime victory last season.

Maretzki discovered the importance of the kicking game in the rivalry his freshman year. His 24-yard field goal proved to be the scoring difference in Army’s 10-7 win in 2020.

“As a unit, we have to make the most out of every opportunity we’ve go,” Maretzki said. “Every point counts whether it’s an extra point or field goal.

“I’m just grateful any time coach Monken has the confidence to send us out as a unit. We always have the team counting on us and always looking to execute and come through for everybody.”

The junior from Honolulu, Hawaii has made four of five field goals this season, including two with his parents Mark and Erin and younger brother, Jack, in attendance in a 48-24 win over Louisiana-Monroe last week.

“Just looking as season, we haven’t been taking many field goals kicks as a whole and for them to be there and getting the opportunity to go out there and hit a couple, that was really special and I was just grateful for them to see that,” Maretzki said.

Maretzki is also thankful to Army’s coaching staff for giving him a second opportunity. He entered the transfer portal in January. The time that Maretzki spent away from football allowed him to look at the bigger picture of the academy.

“This experience is so much more than just football,” Maretzki said. “It’s really about there’s a great opportunity that this academy provides beyond graduation and beyond football. Once I realized that, I was very fortunate that this coaching staff welcomed me back…I’m just happy and confident in my decision to stay with this team and the brotherhood.

Maretzki emerged as Army’s top kicker out of preseason in a competition with incumbent Cole Talley, who kicked the Black Knights to a win over Missouri in the 2021 Armed Forces Bowl.

“Every kick, you try as best you can to keep the same. I keep the score out of my head when I’m on the sideline. I’m kind of out there in my own little world, in my own little bubble. I try to stay focused on the process and my technique.”

Promise Maretzki will be locked in next Saturday, ready for the call. In a series where points have been recently at a premium, every kick counts.