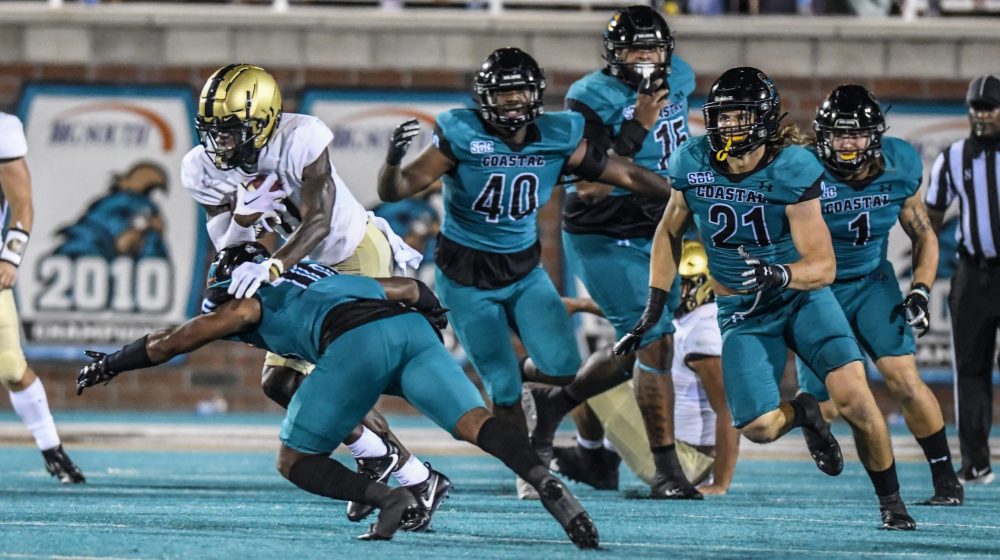 Don’t know how it came across on television but there was a rivalry game feel attending Army’s season opener at Coastal Carolina live.

From sitting in the stands in the first half to covering the second half from the field, it would have been perfectly fine for the teams to play forever.

Army and Coastal Carolina played the game at a high intensity level from the start. It was chippy. Some extra hitting and shoving after whistles. Some players getting their helmets taken off.

In the end, mutual respect was earned.  There was a point in the second half where Coastal Carolina coach Jamey Chadwell was checking on an injured player on the field. Army all-American linebacker Andre Carter passed Chadwell and the two exchanged fist bumps.

Army and Coastal Carolina are in the same position in college football. Successful programs battling for respect every game and every snap. They play three more times over the next five years. Can’t wait until the rematch at Michie Stadium next season.

Winning time of possession has been an outcome indicator for Army under Jeff Monken in the last 9 years. Coastal Carolina flipped the statistic, dominating the ball in the second half and controlling it for 36 minutes and 16 seconds in a 38-28 Army loss.

The Black Knights are now 5-17 in games where they don’t win time of possession in the Monken era. Going to check this stat but from memory was the first time since Monken took over that Army ran less than 50 plays (47) in a game that the opponent wasn’t Navy or Air Force.

Coastal Carolina kept Army’s defense on the field for 5 minutes and 9 seconds of its final touchdown drive. The Black Knights subbed frequently on the defensive line all night but can attest the heat and humidity was also a factor as multiple players from both teams cramped up.

It’s going to be a tough season for Andre Carter, who was second in the nation with an academy-record 15.5 sacks last year, if offensive linemen are allowed to hold and grab the way Coastal Carolina did. The one time holding was called Carter was literally tackled to the ground. Probably could call holding on most pass plays. But, think Carter deserves more respect from officials than he received Saturday.

Coach Jeff Monken said the defense missed more than 20 tackles in the game.

Army passed for 142 yards, just 60 yards less than it rushed, and averaged 35.5 yards on four completions. But, 127 yards came on touchdowns where both Ay’Jaun Marshall and Braheam Murphy were wide open off play action.  The Black Knights needed more of an intermediate passing game to keep Coastal Carolina honest and drives manageable.

The quarterback running game was completely taken away by the Chanticleers. Tyhier Tyler and Cade Ballard combined for -5 yards on seven carries, including a seven-yard sack. Tyler had a negative run (1 yard) on first down on Army’s opening drive. Two plays later, Ballard’s quarterback draw lost 3 yards on his first play and the Black Knights were forced to punt.

Was standing on the sideline a few feet from Tyler’s interception on the final play of the third play. The jump-ball pick is pass that you certainly don’t expect to be thrown by a veteran quarterback. Tyler honed up the game’s only turnover in his postgame interview. That’s why coaches love Tyler’s leadership.

Coastal’s play of game may have been the decision to go for it on 4th-and-goal from the 7 in the fourth quarter. Grayson McCall threw a pass in the area of Sam Pinckney that cornerback Cam Jones couldn’t turn around on fast enough as pass interference was called. Coastal would score to build a two-possession game.

Speaking of McCall, the nation’s most efficient passer last season, the junior managed the game, throwing just 17 times. McCall’s 26-yard touchdown pass to a diving Pinckney in the second quarter was a beauty.

Cornerback Donavan Platt was the first freshman to receive snaps (offensive or defensive) this season when he entered game in the second half for Cam Jones, who was injured and later returned.