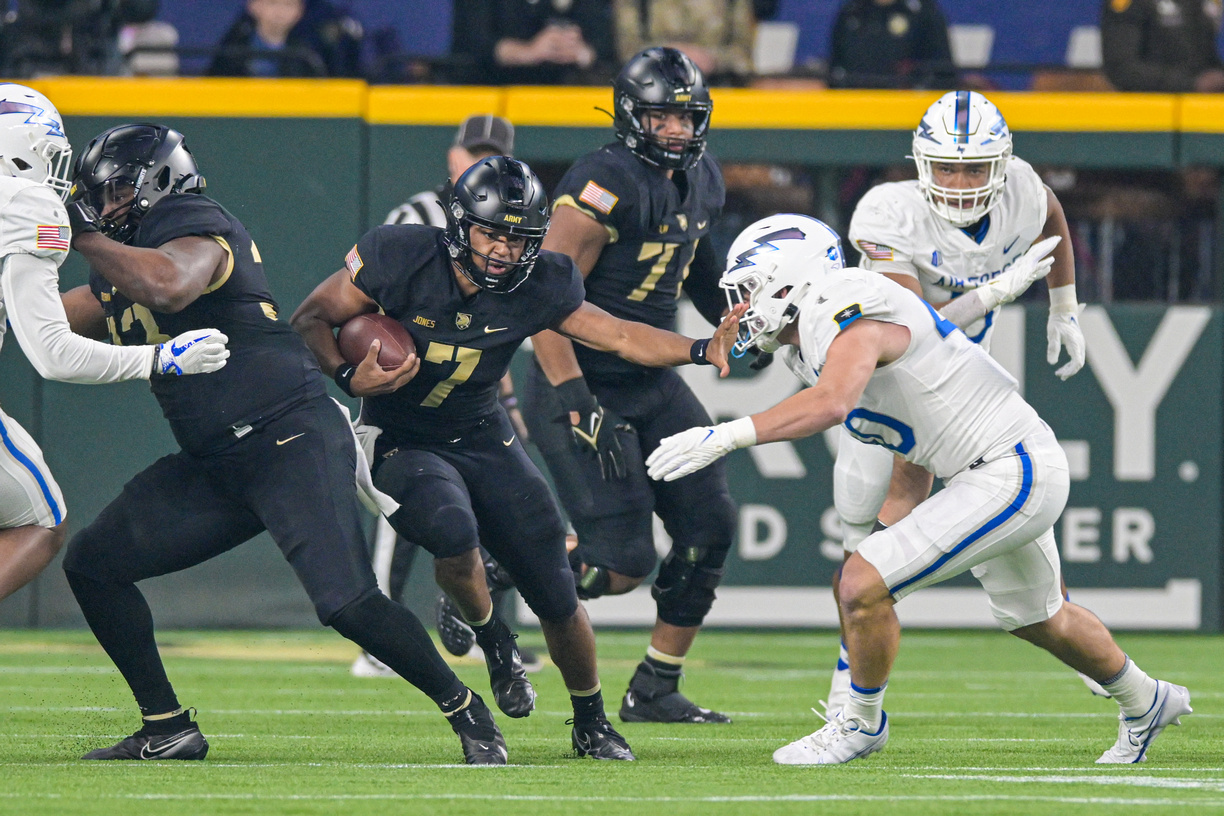 “We didn’t do much running the football,” Monken said. “We had one drive the entire game. That’s it. They kicked the crap out of us other than that.”

Army’s offense never seemed to find a rhythm. Give Air Force’s defense some of the credit. But, it must have felt like practice reps for the Falcons as Army ran a majority of its base plays with not much creativity.

As usually is the case, Army had two weeks to prepare for Air Force. Not much out of the ordinary was called to throw off the Falcons’ defense. The Black Knights had quarterbacks Tyhier Tyler and Jemel Jones on the field for their first play and switched Tyler from slotback to under center before the snap. But, that was about it.

For the first time in Jeff Monken’s nine seasons at West Point, Army was held to less than 100 rushing yards. The Black Knights only mounted 78 yards on 35 carries. Quarterback Jemel Jones had 21 carries (60 percent of the team’s) for only 37 yards. Fullbacks Tyson Riley and Jakobi Buchanan combined for 29 yards on 10 carries. Wonder if younger fullbacks Hayden Reed and Markel Johnson could have made a difference? Army’s longest run was nine yards by Jones.

The Black Knights didn’t try to gain the edge (maybe it wasn’t there) as slotbacks carried the ball once for minus two yards.

Army, which led 7-3 at halftime, ran nine plays for a total of minus 6 yards in the third quarter and had just two first downs in the second half.

Still, the Black Knights had the ball at its own 17 with 1:38 left, needing a touchdown to win. Jones completed 1-of-6 passes for 2 yards on a drive that ended with an interception 17 yards down the sideline on 4th-and-2. The 2-yard pass was caught by fullback Tyson Riley one yard short of marker on third down, which caused Army to use more valuable time off the clock to pick up first down on Riley’s dive.

Going through our photos from the game, safety and captain Marquel Broughton was everywhere before leaving the game in the fourth quarter due to injury. Broughton recorded his sixth 10-tackle game of his career and picked off his sixth career pass. The passion that Broughton showed on the sideline in the fourth quarter and his want to get back on the field is what makes him an incredible leader. Good to see Army err on side of caution and not have Broughton return to the game.

Army’s defense may have played its best game of the season and certainly played well enough to win. Nate Woody’s defense have allowed 17 points or less in all five of the coordinator’s CIC trophy games against Air Force and Navy.

The Black Knights holding Air Force to a field goal after reaching Army’s 1-yard line felt like a a wee. momentum shift with the help of some Falcon penalties. However, Army followed with a 3-and-out, which included two negative-yardage plays.

Andre Carter returned to starting lineup for the first time since Wake Forest and was a disruptor. Carter was tackled or bear hugged on pass rushes multiple times and drew one flag on Air Force.

Punter Billy Boehlke was Army’s MVP game and had his best game of the season, averaging 42.9 yards on seven kicks. Army had punted eight times in its first seven games.

For more analysis, check out recap and livestream below