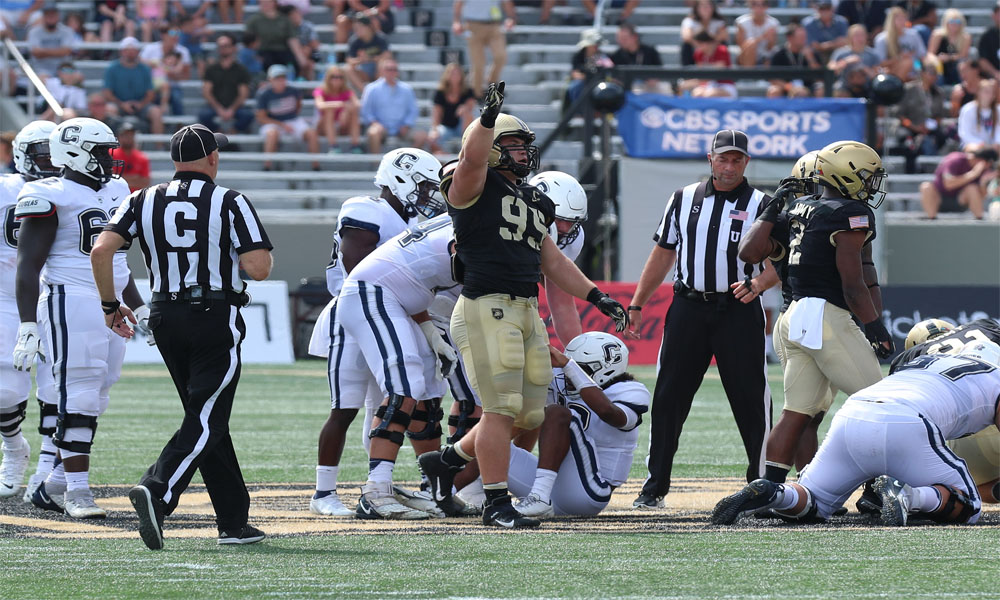 Army is a 7.5-point home favorite against Miami (Ohio) Saturday at Michie Stadium.

The Black Knights’ 12-game home winning streak is on the line against Chuck Martin and Miami (Ohio).

One of the more exciting Michie Stadium finishes happened the last time that Martin and the RedHawks visited West Point in 2018.

Elijah Riley, now with the Philadelphia Eagles, stopped Miami short of converting a game-winning 2-point attempt with an assist from Javhari Bourdeau to send Army to a 31-30 double-overtime win.

Captains Arik Smith and Cedrick Cunningham, offensive lineman Dean Powell and cornerback Julian McDuffie are the only active Army players that saw action in the victory. Senior apache Malkelm Morrison watched the 2018 game from the sideline.

The talk this week outside Army’s locker room has been Martin’s comments about cut-blocking that the Army offense utilizes and Tennessee cancelling its 2022 game with the Black Knights.

Army is seeking its first 4-0 start since 1996. Coach Jeff Monken and offensive coordinator Brent Davis said Miami (Ohio), which is off to 1-2 start, will be the team’s most difficult opponent to date this season. The RedHawks’ two losses have come No. 8 Cincinnati 49-14 and Minnesota 31-26 on the road. Miami was outscored 56-3 in the first half in both games. So, a strong start should benefit Army. The Black Knights have yet to allowed a point in the first quarter this season. Army has allowed 21 first-half points through three games.

Sal Interdonato (Black Knight Nation): Army 34, Miami (Ohio) 17. The Black Knights’ offense scored touchdowns on their first six drives last week against UConn. Miami (Ohio) may have a better shot at slowing down Army’s attack but look for the slotbacks to have another big day in another home win.

Predictions from across the college football nation
Pete Fiutak (College Football News): Army 30, Miami (Ohio) 23
Kevin McGuire (Athlon Sports): Army 28, Miami (Ohio) 17. McGuire writes on Athlon Sports, “If you are looking for a safe bet this week, Army may be it. Army is 3-0 with two wins by at least 30 points. They may not win this one by 30, but trust the ground game of Army to work its magic.”