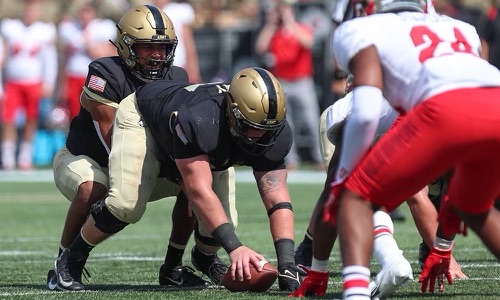 Anderson and Army are having fun throwing the ball in their first two wins.

And, the Black Knights have been darn near perfect through the air.

The Black Knights have one of the more effective passing games in the country through Week 2.

“It just starts with our mindset of our mindset being a quarterback,” said Anderson, who is one of eight quarterbacks up for the Manning Award this week. “One thing that we wanted to focus on this year is efficiency. Obviously, we are going to pass the ball a ton during the game but when we do get those opportunities we want to be efficient and complete them when we can. That’s one thing that we emphasized during the summer going into the season and just being efficient with our pass plays.”

Anderson entered West Point as an accomplished passer. He threw for 3,656 yards in his senior season at Cardinal Hayes, 24 yards shy of the New York state record held by former Duke guard Greg Paulus. Anderson, a senior, has thrown two touchdown passes this season, both of 40 yards, to double his career total.

Army quarterbacks look like they have more confidence when they drop back to pass this season. Nothing feels forced. Offensive coordinator Brent Davis appears to have more confidence in calling pass plays too. Though analytics may have partially dictated the pass call on 3rd-and-1 in Western Kentucky territory on Army’s first drive, the Black Knights still threw on the down and distance where a fullback draw or quarterback keeper is generally used.

Davis said one of the offense’s goals is, “we want to lead the country in passing efficiency and there’s no reason why we shouldn’t do that.”