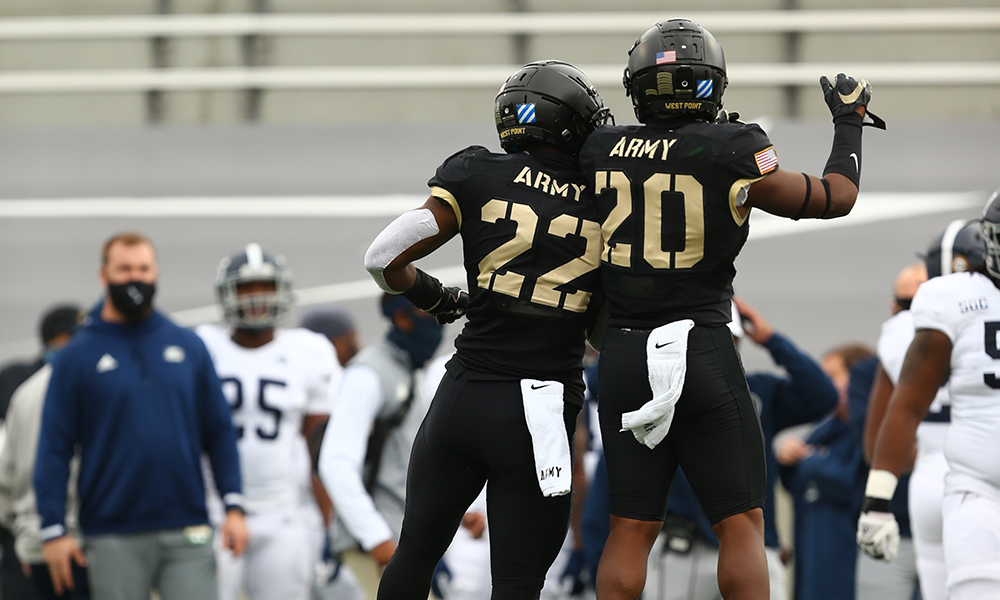 The personality of Army’s 2020 defense started in the first meeting with new coordinator Nate Woody in the spring.

Woody told his defensive players that they would break down every day in practice with the words, “broad ax.”

The two words would define toughness of Army’s defense. A swagger within the unit began in preseason practice and has continued through the regular season.

It’s a swagger that safety Marquel Broughton says has defined one of the nation’s top defenses and statistically, one of the academy’s best.

As of this writing, the Black Knights leads the nation in passing yards allowed (149.9 yards/game) and ranks second in total defense (271.1 yards/game) and scoring defense (14.0 points/game).

“We really embraced our defense and our role as an individual and that swagger is just different,” said Broughton, a sophomore who has started all 11 games. “It happened in the summer. We were clicking when we were out here in the Foley (Center), getting more and more practice. We already felt that we were behind. I think that eagerness and swagger that we have is what makes us.”

Broughton has emerged as one of the defense’s voices. A few talks with 2019 captain Elijah Riley, now playing with the Eagles, and coach Jeff Monken inspired Broughton to speak up.

“I believe I’ve been a good leader growing up in rec leagues and high school,” Broughton said. “I think I had it.

“They told me I needed to step up and I have some leadership skills that I need to voice out a little more and don’t let anyone else take over and be that person.”

Army has nearly doubled its interception total from last season with 13 picks, embracing the nickname of “Takers.”

“In the huddle against The Citadel, Cedrick Cunningham said, ‘We are taking the ball and takers on three,'” Broughton said. “It happened. We got the ball. That’s the first thing that came to my head and I have to give it to my boy Ced.”

If Army is going to add to its interception total in the Liberty Bowl, it will be against an accurate passer in Jarret Doege. Doege has thrown only three interceptions in 349 attempts.

For more with Broughton, check out our full interview below.