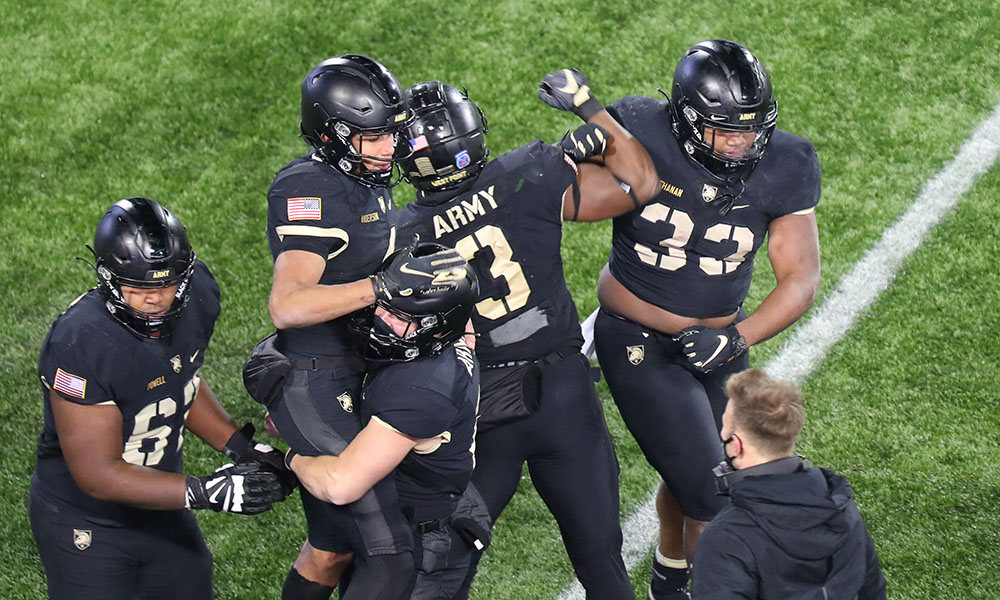 Jakobi Buchanan walked onto the field and lined up two yards behind quarterback Christian Anderson for one final try.

A half-yard, 18 inches, separated Army from the lead or a reversal of fortune. It was Army’s defense that held with a fourth-down stop over Navy one week ago.

Air Force had stopped Buchanan twice in a row inside the 5-yard line. Buchanan wouldn’t be denied on the third time with 1:13 left.

The Black Knights’ 260-pound fullback kept his legs and body moving across the goal-line on the drive’s 16th play and let out a roar of emotion.

Army’s defense would seal a 10-7 with its third interception on the next play. Defensive end Kwabena Bonsu tipped a pass from Haaziq Daniels into the hands of linebacker Arik Smith.

Two kneel-downs later, Army had captured its third Commander in Chief’s trophy in the four years. The Black Knights have passed the gauntlet of Navy and Air Force in back-to-back weeks and earned service-academy royalty status on its home field for what would probably be the first and last time.

The Black Knights survived the second leg of CIC, overcoming the loss of “about 50 players,” according to coach Jeff Monken, who did not dress, and injuries to starting quarterback Tyhier Tyler and fullback Sandon McCoy during the game.

There were plenty of heroes to go around in the historic victory.

Buchanan, who was one of the last fullback standing, played through some pain to carry a career-high 21 times, including nine times on game-winning drive.

Bonsu tweeted earlier in the week, “This weekend, I am actively choosing violence,” after missing the Navy game. Goal accomplished. Bonsu was a physical presence up front.

Now, Army awaits Sunday’s announcement on its opponent for the Independence Bowl next Saturday. The Black Knights has a chance for their third 10-win season in the last four years.

Army could be playing the bowl as a ranked team. We’ll see tomorrow.