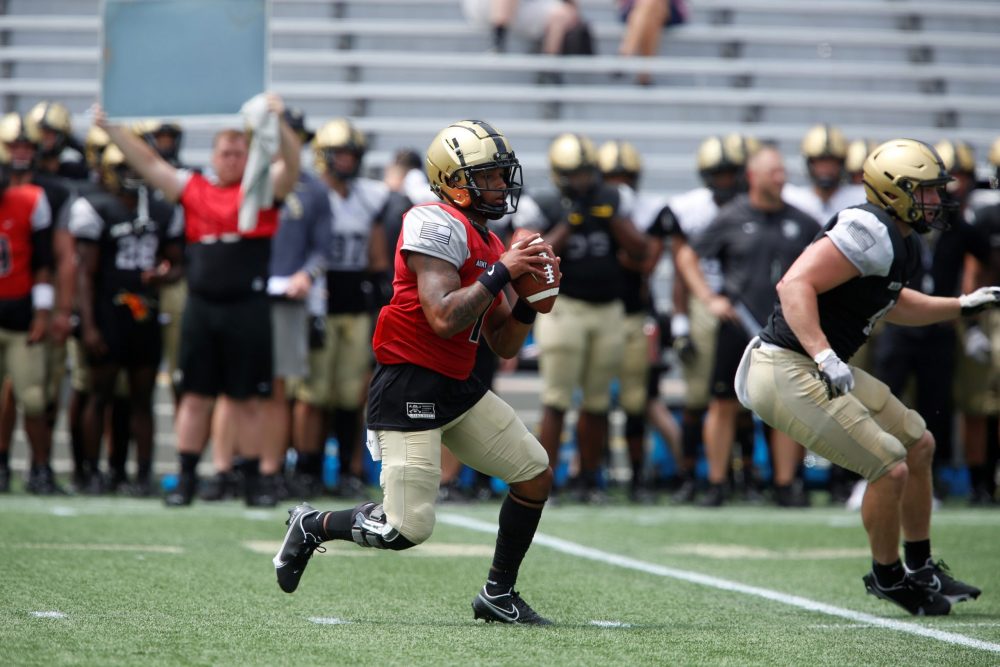 Jabari Laws’ touchdown pass to Braheam Murphy was another sign of the senior quarterback’s comeback during Army’s scrimmage Saturday.

What came after the pass was what helped Laws through his rehabilitation from a second knee injury.

Laws said every player in Army’s quarterback room celebrated the touchdown with him on the field. Laws is competing with a handful of those quarterbacks to be Army’s starter.

Saturday was the first time since that Laws participated in an 11-on-11 drill with, “people really flying around,” since last preseason when he reinjured his knee and missed the 2020 season, Army coach Jeff Monken said. Laws also took snaps in a hurry-up offense.

“I was glad to see Jabari get back in there and get in there in a one-minute situation where we had to hurry up,” Monken said. “It’s been a while since he’s done that and just the opportunity gives him some confidence. He had a couple of throws where he didn’t get quite what he need to on it. He sailed one. But, it’s just good to see him releasing the ball on time and doing a good job in those situations.”

Laws said, “there was a lot of doubt” about taking the field again after his 2020 preseason injury. He entered this preseason as a stronger player, adding about 15 pounds to 185. Laws said he played at around 165-170 as a sophomore when he was Army’s starting quarterback.

A smile stayed on Laws’ face throughout the 10-minute media interview. His love for the game and his teammates is evident.

“He’s the most positive guy that I have ever met,” Army senior linebacker Arik Smith said. “No matter what the circumstances or the situation is, he’s always going to be positive about it and that brings energy to everybody around him. If you are being positive, people look up to you as an older person on the team and as a leader on the team such as he’s been in the past years. It just makes everybody feel good.”

“It was a wonderful feeling,” Laws said. “Just being back in Michie Stadium is something that I’ll probably never forget. It’s wonderful to be back there with my brothers and grinding every day. I’m grateful for this opportunity and I just want to thank all of the coaches for allowing me to get to this comfort position again.”

Laws said that he was going to call his parents after the scrimmage and tell them all about his return. He stepped on the Michie Stadium turf in uniform for the first time since Nov. 16, 2019.

QB talk: Tyhier Tyler took the first snaps under center. Tyler started the last four games of the 2020 season. Army won three of those games including victories over service-academy rivals Navy and Air Force in back-to-back weeks…Junior Jemel Jones was under center for the second drive followed by junior Maurice Bellan. After a series by Simeon Evans, Laws received snaps followed by Christian Anderson and Cade Ballard.

“I think those guys are really working hard and helping each other improve because the pride that each of them takes in their job,” Monken said. “They all want to be the starter and that’s good but they all support each other as well. It’s nice to be on a team where you have those things happening with guys competing for the job but there’s no animosity about it. Ultimately, they all want to sing in the locker room after the game. That means we won.”

Pierre OK: Monken said his “favorite thing” about Saturday was when senior running back Markens Pierre walked off the field under his own power at the end of the scrimmage. Pierre was tackled by multiple players on a run.

“It was a bang-bang play,” Monken said. “He made a nice move to make the first guy miss. He got one (tackle) on the legs and one up high and hit the turf really hard. Any time a guy is laying there and is feeling injured or feeling hurt and there’s any concern at all about a head or neck injury, they are going to completely check him out to make sure he’s OK head to toe and when he is they sit him up and walk him off. We have a great medical team and they are very thorough. I’m glad they took the time to do that.”

Jabari Laws found slotback Braheam Murphy down the middle for a long score.

VIDEO: Senior QB Jabari Laws talks about his play during scrimmage and his road back from knee injury.