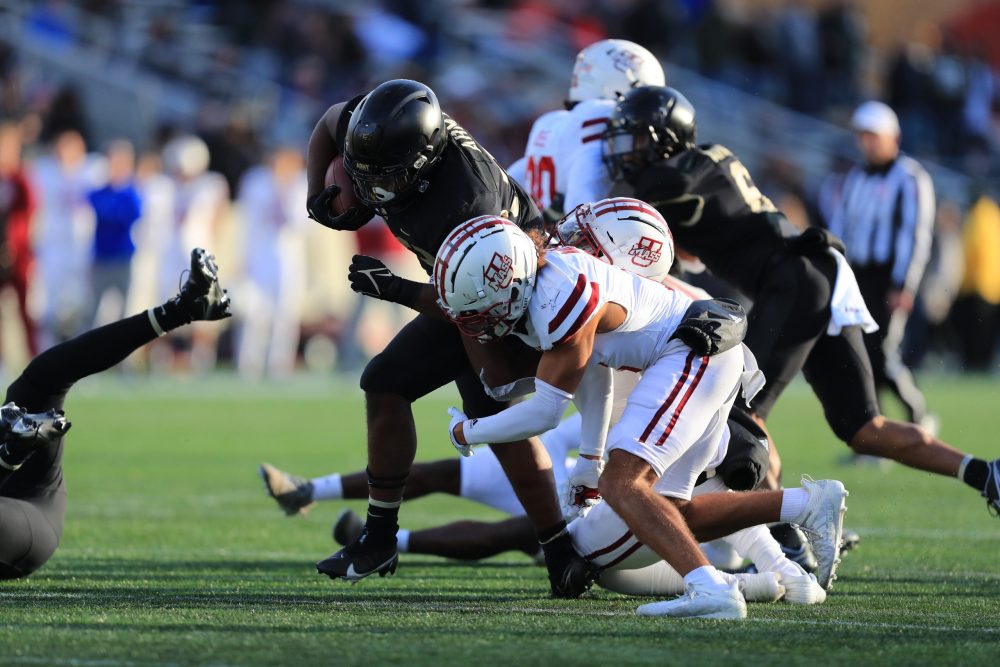 Army’s first-half mistakes were adding up to a long list that was keeping 36-point underdog UMass in the game and believing it could pick up its second win.

The miscues continues after halftime with a drive-stalling penalty and more missed assignments.

A predicted blowout turned into a two-point lead as UMass closed the gap with less than 14 minutes left.

Army turned to its go-to – a running game featuring a heavy dose of its fullback stable – to pull away with two fourth-quarter touchdowns for a 33-17 victory on an emotional Senior Day.

“It was a lot more fun to watch than the first three quarters,” Army coach Jeff Monken said of the fourth quarter. “I feel relieved that we won the game because we didn’t play well enough to win but fortunately we did. I guess just well enough to win. I said it 100 different ways, we have to get better.”

The Black Knights rallied together after senior cornerback Julian McDuffie was taken to Keller Memorial Hospital on post with an apparent serious leg injury in the third quarter.

“After that happened, we were all motivated to finish the game like how Julian would have finished it,” said Cunningham. “He plays really hard. He’s one of the hardest workers on this team. We just wanted to come out with the victory and play hard for the remainder of the game for him.

Fullback Jakobi Buchanan capped a 11-play drive, leaping into the end zone for his eighth touchdown of the season in response to UMass trimming Army’s advantage to 19-17. Buchanan started the fourth-quarter drive with a 26-yard run and carried the ball five times for 49 yards on the possession. Quarterback Tyhier Tyler added a 25-yard touchdown to close Army’s scoring.

“I think we just got back to what we were good at,” Buchanan said. “Everyone calmed down on the sidelines. We knew what we had to do and we just went out and did it.”

Army’s errors started early on its first drive. Quarterback Christian Anderson’s long run inside the UMass 10 was called back on illegal block by Braheam Murphy. Punter Zach Harding fumbled the snap that was recovered by UMass at Army’s 28 and led to a 45-yard field goal by the Minutemen.

“Personally, I think kind of went into a lax (lackadaisical) mode and that can’t happen especially against great teams,” said Army sophomore running back Tyrell Robinson, who answered the UMass field goal with an 87-yard touchdown run. “UMass is a good team and they could have capitalized on many of our mistakes. I’m glad we got the win today.”

Monken said the best takeaway that his players could learn from Saturday’s game is, “that fundamentals win football games. Great execution and the fundamentals is all that matters. It needs to be a wakeup call for us because there were plenty of times where poor fundamentals got us in trouble and we have to improve that.

“Hoping those guys will learn that lesson and have enough humility to see the areas where we can improve and us as coaches need more than anything tp have to get those guys to do that. We have to coach them better so that we don’t have those mistakes that we have complete control over.”

The competition increases over the next two games with a road game at Liberty (7-4) and annual showdown against Navy.

“Coach (Jeff) Monken said it in the locker room, ‘there’s no easy wins in FBS (Division I-A) football and all the credit goes to UMass,” said senior fullback Cade Barnard, who completed a two-point pass to tight end Josh Lingenfelter. “They played really, really hard. They have some talented players. It might be ugly. There might be some things that we messed up but it’s always good to get a win. It’s about going back tomorrow watching the film, learning from our mistakes and hopefully playing better.”