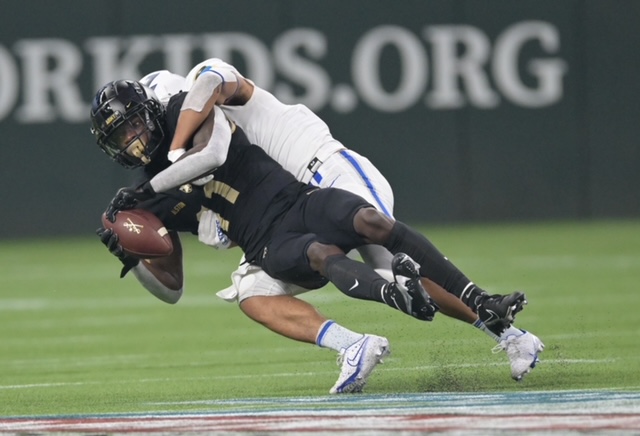 But the most telling statistic was that the Army football team was held to just 78 rushing yards for the entire game and only 18 yards on the ground in the second half.

That was the difference in an epic struggle between the Black Knights and arch-rival Air Force at Globe Life Field in Arlington, Tx. with Air Force walking away with its first Commander-in-Chief trophy since 2016 (The Falcons beat Navy 13-10 in early October) and its first victory over Army since 2019.

The Falcons stymied the Army offense throughout the second half, forcing the Black Knights to punt the ball on three straight four-and-out drives after halftime. In fact, Army’s only offense of the half came on its last possession of the game and ended with an interception with just 19 seconds left that sealed the defeat.

Yet, this was a typical Army/Air Force game. Well aware of how they each play the game, both defenses rose to the occasion throughout the game with each team giving up just one touchdown. Air Force’s only score of the first half came on a 35-yard field goal late in the first quarter. Army’s only score came on a three-yard scamper by quarterback Jemel Jones with 3:35 left in the first half after two nice passes to Isaiah Alston and Ay’Juan Marshall set the Black Knights up on the Air Force 10-yard line.\

“We were able to open up in the passing game,” said Jones. “We were able to pick our one-on-one battles with Isaiah on one of their corners, and we were able to get a little rollout and have Ay’Jaun go out to the flat. Those were two really good chunk plays that helped us get down to the red zone and end up punching it in, so that was big for us.”

Army’s outstanding safety Marquel Broughton picked off an Air Force pass and returned it to the Falcons’ 42-yard line late in the first half. But the Black Knights were unable to capitalize on the turnover and took a 7-3 lead into halftime.

The second half belonged to the Air Force defense and especially its big defensive line that stopped Army from doing about anything inside or outside. Neither Jones, the starting quarterback, or backup Tyhier Tyler were able to mount any type of serious offensive drive in the second half. For the game, Air Force held Army’s rushing game to just 2.2 yards per carry and Army was held to eight first downs in the game and just two in the second half.

Meanwhile Air Force quarterback Haaziq Daniels scored on a 17-yard quarterback counter to cap the team’s first possession of the second half to give the Falcons a 10-7 lead. The Falcons were on the doorstep of another touchdown early in the fourth quarter but two consecutive illegal procedure penalties and a sack moved Air Force from the one-yard line back to the 17-yard line. Air Force eventually settled for a 25-yard field goal to go up 13-7.

“I want to commend Army. They played hard,” said Air Force coach Troy Calhoun. “But our defense the last 35 minutes was extraordinary. And our offense made the plays with Ziq (Daniels) leading the way. A shooter in basketball keeps shooting and a pitcher in baseball keeps throwing strikes. He made some great passes.”

Army coach Jeff Monken said: “That’s a big game for us. Playing for that trophy is a source of pride for our academy and for our program, and to have to relinquish that trophy is awfully tough. My hope is that our guys will continue to fight, fight for each other, keep playing. I think they will, I think we got a tremendous culture in our program.”

Daniels rushed 18 times for 89 yards while Brad Roberts had 135 rushing yards on 33 carries. Jones led the feeble Army rushing attack with 37 yards on 21 carries. He had four completions, including the two during Army’s only scoring drive, on 14 passes for a total of 67 yards.