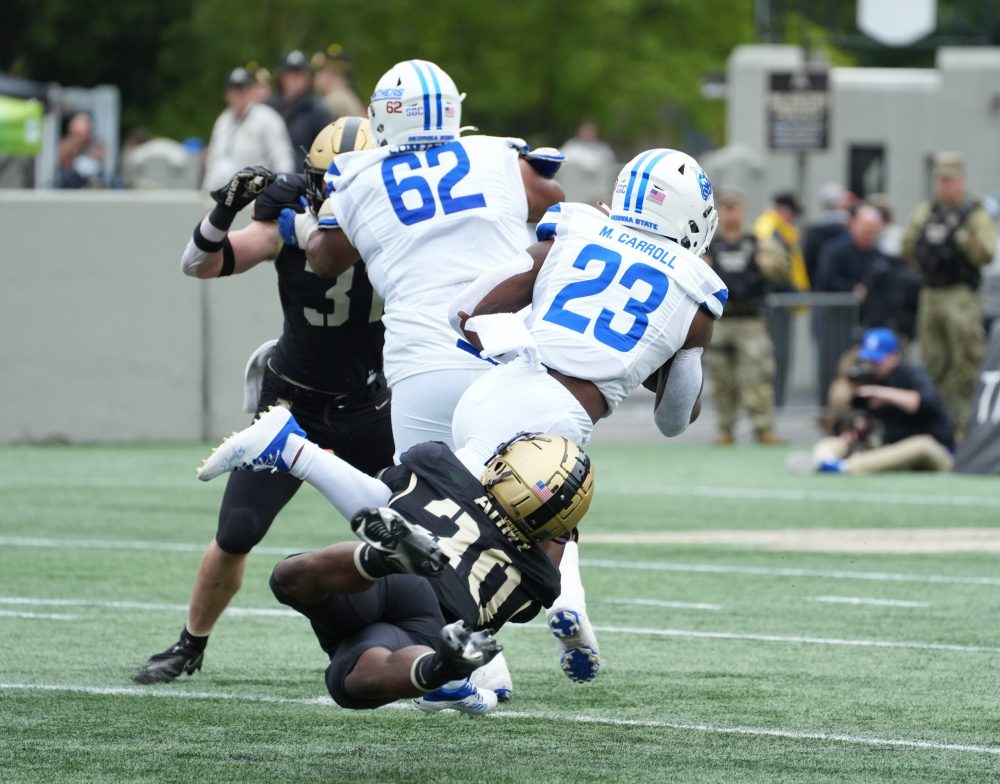 It all really came down to the length of a hat.

No matter what else happened before or after in Army’s disappointing 31-14 loss to Georgia State at a surprisingly-dry Michie Stadium on Saturday afternoon, a fourth down play that started no more than four or five inches from the goal line midway through the fourth quarter made all the difference in the world.

Trailing 17-14, with about nine minutes to play, Army’s big and long-consistent fullback Jakobi Buchanan was stopped inches from a touchdown on a fullback dive on a fourth-and-inches. And, even though Army managed to quickly force a punt, the Black Knights failed to get within striking distance for a game-tying field goal, instead giving up two late 50-yard scoring plays to account for the final tally.

“What I appreciate about our guys that they always feel they can win the football game,” said Army coach Jeff Monken, who watched his team fall to 1-3 on the season with a road game against a ranked Wake Forest squad coming up next Saturday. “We got down there on the one-inch line and we could not get it in to go up 21-17. I think that would have gotten everyone’s mojo going pretty good.”

Eschewing a game-tying field goal, Monken was confident that Buchanan and his banged-up offensive line would get the job done. Army was 0-for-4 on fourth-down tries.

“The play there for us is to bang it in,” he said. “That is what we do. Our fourth down conversion rate on fourth and one is probably around the 90 percent rate. We had fourth and the length of my hat and we could not get it in.”

That Army was in position to take the lead in the game against the previous winless (0-4) Panthers is somewhat of a miracle. The Black Knights essentially gave the first half away to Georgia State, losing fumbles that ended impressive offensive drives in both the first and second quarter. Meanwhile, Georgia State looked like a top 25 program, starting its scoring with a 46-yard field goal and following that up with a 13-yard run by quarterback Darren Grainger and a 33-yard run by running back Jamyest Williams to take a 17-0 lead into halftime.

“We had some opportunities in the first half, but we fumbled the ball,” Monken said. “We moved the ball and we moved the ball down the field. It was not a matter of not gaining yards but of protecting and taking care of the ball.”

But a re-energized Army team emerged from the locker room after the break. The Black Knights took the second half kickoff and drove 75 yards on eight plays for their first score, a 1-yard run by quarterback Tyhier Tyler. After forcing a quick Georgia State punt, Army drove 80 yards in 13 plays, with Tyler running in from the 5-yard line very early in the fourth quarter for his sixth rushing touchdown of the year.

The Army faithful was soon rewarded with Georgia State’s only turnover, a fumble forced by the effort
of safety Marquel Broughton and recovered by Leo Lowin at midfield and the offense was quickly back in business. Five minutes later, Army had a 1st-and-goal from the Panthers’ 6-yard line, but three rushing plays only produced five yards and the 4th-and-inches play.

Army finished with 354 rushing yards on 69 carries, but the Black Knights only completed one pass
and backup quarterback Cade Ballard threw a late interception that sealed the team’s fate.