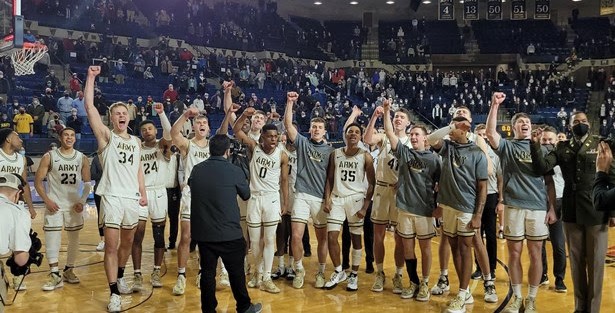 The game’s outcome seemed to be determined.

Army trailed Navy by 22 points with 11:46 left in the service-academy basketball rivalry. ESPN gave Navy a 99.8 percent of winning.

The Black Knights had other plans. Sparked by a career-high 20 points from Chris Mann, Jalen Rucker’s consistent play and pressure defense, Army made it all the back. In a game where the Black Knights were 27 points down in the first half and scored just 18 points at the break, it was Army singing second following a 74-73 overtime victory at Alumni Hall in Annapolis, Md.

The 27-point comeback is the sixth-biggest in Division I men’s basketball history, according to Army Athletics.

Mann scored 13 points in the final five minutes of regulation and overtime. The junior forward’s steal and pass led to Rucker’s game-winning layup with 28 seconds left.

Army (12-8, 6-2 Patriot League) caught fire from 3-point range in its second-half run. The Black Knights made six straight 3-pointers including two each from Rucker and Mann.

It wasn’t the first time that Army rallied from a deep hole against Navy in recent history. The Black Knights overcame a 25-point disparity in Feb. 2017 for three-point win.

Saturday’s win was Army’s fourth in the last five games vs. Navy. Jimmy Allen notched his seventh victory over Navy, the most by any Army men’s coach.