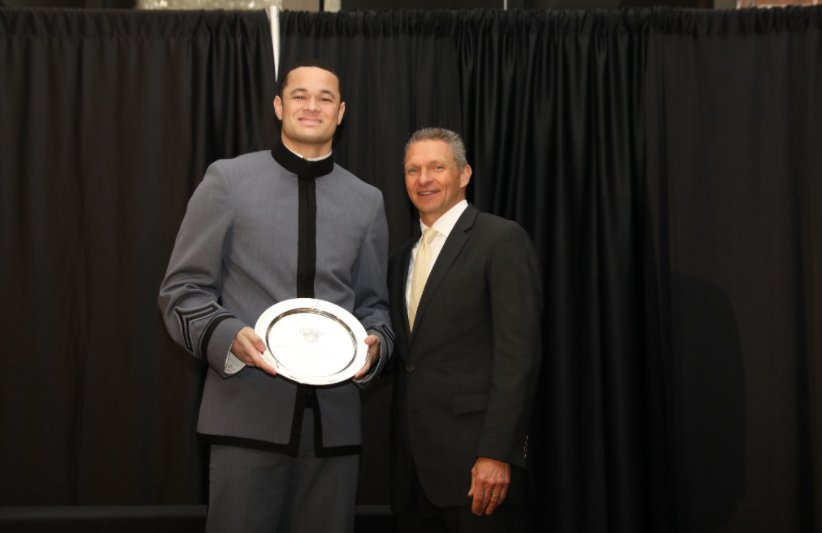 Carter authored one of the best seasons by a defensive player in Army history. He broke the academy’s single-season record with 15.5 sacks. The former scout-team player earned all-American honors from the Associated Press (third team) and Phil Steele (second team) and is one of the nation’s top returning defensive players for the 2022 season.

Carter led the nation in sacks per game (1.19) and finished second overall in sacks behind Alabama’s Will Anderson (17.5), who played in two more games. Army players voted on the MVP award.

Senior captains Nolan Cockrill and Arik Smith were honored with two individual awards. Cockrill, a nose tackle, received the Thomas West Hammond Award (team’s most outstanding lineman) for the second straight season as well as the lifter of the year.

The Anthony Miller Coaching Staff Award was given to a deserving senior. Quarterback Jabari Laws, who overcame two ACL tears, returned to the field to lead Army to its winning drive in the Armed Forces Bowl and threw three TDs passes against nationally-ranked Wake Forest.

Senior fullback Cade Barnard was the recipient of the Chase Prasnicki Memorial Award as the senior that best displays the qualities for the former Army quarterback and safety.

Senior linebacker Kemonte Yow was honored with the LTG Garrison Davidson Award for the senior that has the highest military grade and displays excellence in sportsmanship and leadership.

Army Lifter of the Year (player who performed at high level in weight room): Nolan Cockrill