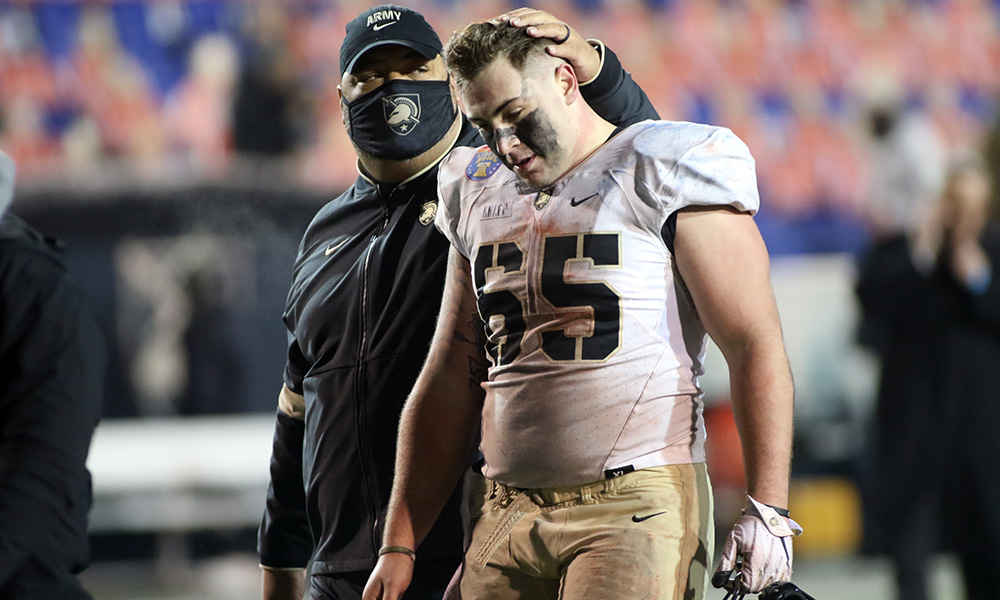 Tyhier Tyler was pulled up from a pile in the end zone by Peyton Reeder amid some pushing and shoving ignited by West Virginia players.

Reeder and Army’s offensive line was winning the battle upfront for the first 13 plays to start the second half and frustrating West Virginia’s front with two potential NFL players.

Army appeared to be wearing down West Virginia and another long drive seemed inevitable. West Virginia would strike back on its next possession and Army would not score again as the Mountaineers tallied the final 14 points in a 24-21 win over the Black Knights in the Liberty Bowl.

“Our guys fought their hearts out,” Army coach Jeff Monken said. “They played as hard as they could play. They believed all the way to the end that we were going to win. We got the ball back with a chance and couldn’t quite do enough.

Army had a chance to tie or potentially take the lead in the fourth quarter. Christian Anderson, who rotated in with Tyler at quarterback, completed a 32-yard pass to tight end Chris Cameron to West Virginia’s 29 for the Black Knights’ longest gain of the day. Anderson handed off to fullback Sandon McCoy for a 4-yard gain and was replaced by Tyler. Momentum was lost as Tyler rushed for 3 yards on second down and held to no gain on third down. Army elected to try a 39-yard field goal by freshman Quinn Maretzki, which was pushed left with 1:50 remaining.

Monken said that analytics suggested to go for it on 4th-and-3 instead of attempt the field goal.

Army’s defense forced a 3-and-out on the next series, giving Anderson and the offense another chance with 1:28 left. Ultimately, the Black Knights’ fate was sealed on a fourth-down interception by West Virginia’s Josh Chandler.

“I’m disappointed that we lost the game but it was a heck of a year and I’m not going to let that tarnish my memory of a great season and just a great bunch of young men that I love dearly,” Monken said. “They have played as well together and I’ve enjoyed coaching this team as much I have any team in 32 years.”

Army led 14-10 at halftime with only 83 yards of offense. Malkelm Morrison provided the game-changing play in the final minutes of the first half. The junior apache sacked and knocked the ball away from West Virginia quarterback Jarret Doege. Ryan Duran pounced on the fumble at the West Virginia 7. Two plays later, Tyler scored on the longest of his three touchdown runs from 6 yards out.

Oklahoma transfer Austin Kendall threw for 121 yards and two touchdowns in the second half. TJ Simmons, who declared for the NFL after the game, caught two touchdown passes for the Mountaineers (6-4).

Army’s season didn’t end the way Monken and the players would have wanted. But, this Army team will be remembered for winning the Commander in Chief’s trophy in back-to-back victories over Navy and Air Force prior to the bowl. And, as Tyler reminded in the postgame interview, the Black Knights will be back and potentially better in 2021. Army started just six seniors against West Virginia.

“We have a lot of returning players going into next season, a lot of key players that are returning and we are going to use this season like a chip on our shoulders, to defend the CIC and win as many games as possible,” Tyler said.